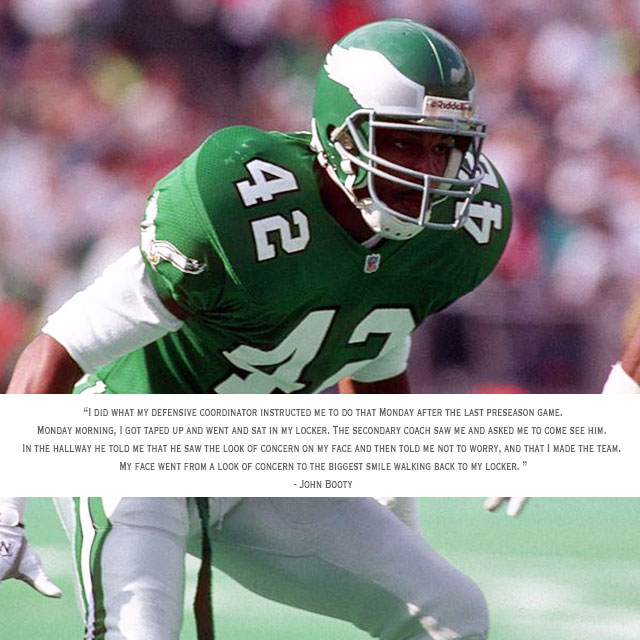 On Making The Team:

The top memory for me was when I learned that I made the team. I did what my defensive coordinator instructed me to do that Monday after the last preseason game. Monday morning, I got taped up and afterwards I went and sat in my locker. The secondary coach saw me and asked me to come see him. In the hallway he told me that he saw the look of concern on my face and then told me not to worry, and that I made the team.

My face went from a look of concern to the biggest smile walking back to my locker. I know the guys thought I was cut when my coach called me over, but they saw that smile and were happy for me.

On His First Game:

I was a 10th round pick and the forth defensive back picked by the New York Jets, so I was a long shot! As far as the game, I was very excited to play against the New England Patriots up there. The thrill and excitement was there during warm-ups and kickoff, but I felt bad after the game because we lost but I did not touch the field. I felt I had let my team down because I didn't get a chance to play and help my team. So, I went into the special teams coach’s office that early Monday morning and told him how I felt. He told me to pay close attention in meetings and get reps in practice. The head coach told me the same. My secondary coach Mike Faulkner told me to keep working hard in practice, because I would never know when my number would be called. My first memory of my first NFL game was not a fun as a player, but things turned around after that first game!