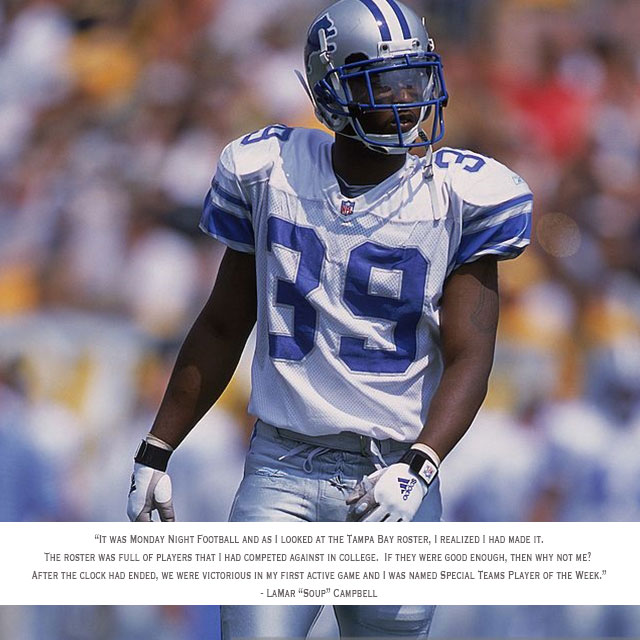 Making your debut in the NFL for any rookie is an unforgettable memory, but making it on Monday Night Football surrounded by the hype and the lights is almost unexplainable. As an undrafted rookie leaving the University of Wisconsin, I went into Lions training camp in 1998 the same way that I left my college program: With a chip on my shoulder. I was there to compete day in and day out and make sure that at the end of the day I left it all out on the field. If I was going to make the team, it was going to be on me to make it happen.

I was injured in the second-to-last game of the preseason, but still made the active roster for the Lions that year. The first game I was healthy enough to play was Monday Night Football against the Tampa Bay Buccaneers. Not only was I told I was going to play, but in a team meeting room with seasoned vets such as Herman Moore, Barry Sanders and Mark Carrier, Head Coach Bobby Ross told me that I was going to be expected to make plays.

It was Monday Night Football and as I looked at the Tampa Bay roster I realized I had made it. The roster was full of players that I had competed against in college. If they were good enough, then why not me? After the clock had ended, we were victorious in my first active game and I was named Special Teams Player of the Week. Nothing like the Pontiac Silverdome on Monday nights, what a memory. Go Lions!