A Q&A ON RETIREMENT AND LIFE AFTER THE GAME

Mike Scurlock is a former NFL DB who played five seasons from 1995-2000 with the St. Louis Rams and Carolina Panthers. Scurlock worked in law enforcement after leaving the league and is now a magistrate judge for York County in South Carolina.

Q: When contemplating retirement, what questions were going through your mind?
Who did you turn to for answers?

I wanted to own my own business, be my own boss. I believe the majority of players think similarly. After my official retirement date, I felt that things did not go as smoothly as I planned.

It’s like drawing plays and diagrams, everything looks good on paper, but when you have to execute it, it doesn’t look as great as you thought it would. When I retired there was a major struggle over what the next step was, what I was going to do. Another portion of it was, “How does this look to everyone else?” When I retired, I struggled over what to do next.

The NFL is the pinnacle of the sport of football. When you do retire, you find yourself wanting to do something with purpose and something that is meaningful. I wasn’t able to do that right away. As a former player, at times you can struggle with your identity. Although I never really had my identity in football, it was more about the purposefulness and meaningfulness of what you do next. I think it’s all in perspective on how you look at things.

It’s like drawing plays and diagrams... Everything looks good on paper, but when you have to execute it, it doesn’t look as great as you thought it would.

After a period of time, I was contacted by a friend to see if I wanted to be a head football coach at a high school. I said yes; however, I didn’t know what all high school coaching entailed.

When I was asked to be the coach for the school, it didn’t look like the pretty school that I had envisioned. I had to drive my own school bus after many years of having police escorts to and from college and NFL games. And now here I was, driving my own little tiny bus going to my football games. I got paid $1,500 for 7 months. I paid more to the school than I received. I purchased shirts for the team, I paid for their meals, I washed all of their jerseys. I did so many different things. And that’s why I say to the players, if you can humble yourselves, everything will take care of itself. You find out more about who you are as a person when you do the smaller things in life. I think the purpose of what I was supposed to do unfolded and worked itself out while I was a head football coach and athletic director for over eight years. 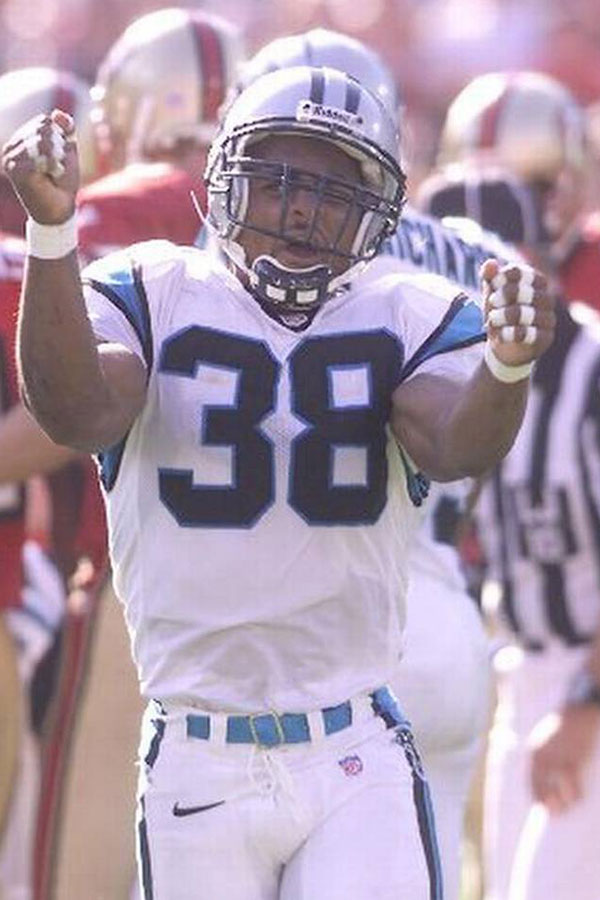 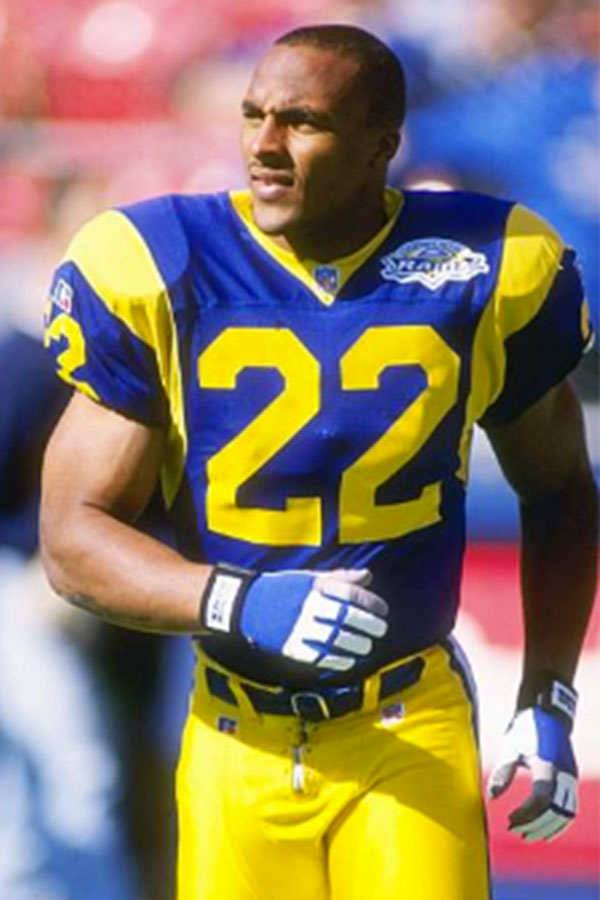 Q: How did you end up going down the law enforcement career path?

As I contemplated what to do next and got past the point of what people thought of me, I began to focus more on what God wanted of me. “You placed me here on earth for a reason, there has to be more that you want from me than athletics. It’s more than money; it’s more than things most people worry about.”

One day when I came home, I heard a loud rumble from upstairs and then saw this huge man running down my stairwell. We made eye contact. It felt like the eye contact lasted for ten minutes, but it probably lasted for no more than two seconds. He ran past me and I chased him outside of my front door. I then kicked his door as he drove away. I thought to myself, I could have done more. During this time I was still thinking about where I was supposed to go, and whose life I was supposed to impact.

I called 911 and the local sheriff’s department who serviced our area arrived at my home, took a report, and investigated the crime scene. The detectives called me later that evening and said they thought they had apprehended the suspect who had broken into my home, and they asked if I minded coming and identifying him. I was so excited as the detectives swung by, I hopped into the back of their police car and even made a joke saying that I was glad that I was in the back of a police car only under these circumstances. It was a great moment; it was a relief to know that they had done their job.

All of a sudden I hear a loud rumble from upstairs and I see this huge man running down my stairwell.

There were so many things that happened for me that night, and I came out knowing that’s where I needed to go, into that line of work. That’s what I did; I joined the local sheriff’s office as a reserve officer. As a reserve officer you don’t get paid, you put your life in danger for no compensation. You ride around assisting police officers. I did that for a period of time, and shortly after the sheriff’s office asked if I would join them full-time. I talked to my wife about it, and she said absolutely not. She was concerned about the dangers the job presented. But I knew it was something that I wanted to do, I needed to try at least. Like I said, I wanted to do something that was impactful for other people and meaningful to me. It was the best experience, because I got to spend time with people who truly needed help. You are meeting people at the lowest points of their lives.

After spending some time as a sheriff deputy, I was promoted to the Public Information Officer, the liaison between the sherriff’s office and the community. I did all the interviews for the sherriff’s office, and I had to speak to what was going on behind the scenes without giving too much information on jeopardizing the case. I stayed in law enforcement for five years before deciding to run for Sherriff. 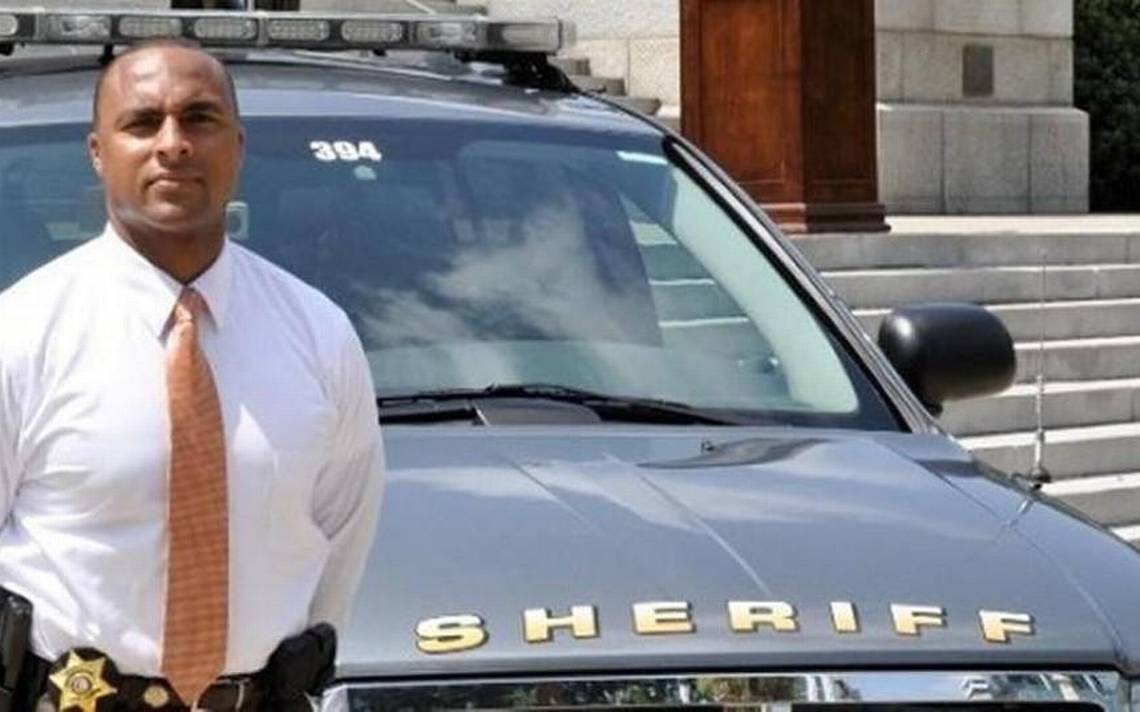 Q: Talk about your experience running for Sheriff and going to law school.

Through the process of running for Sheriff, I still had that burning desire in my heart to do more and give more. I knew that law enforcement was in my blood, and I decided that I wanted to go to law school - that's where The Trust came into my life.

I was going to go to law school regardless, but I thought there may be some other way for someone partnering with me to help pay for my education. I reached out to a few people and I saw an email coming from The Trust about furthering your education. I then reached out to The Trust and began speaking with several representatives like Miritte, my Program Manager.

Sometimes you feel like there are strings attached with programs, and that you're going to have to give back to them at some point in time. With The Trust I never felt that, and my experience could not have been any better. Over the last several years of working with them, I told them how much I have valued their customer service and how I have valued and appreciated how they made me feel as a former player and a person. They showed compassion, and just explained that they wanted to help with whatever goals and aspirations I had. Building that relationship with Miritte, and how caring she was at that time, meant a lot to me.

Sometimes you feel like there are strings attached with programs, and that you're going to have to give back to them at some point in time. With The Trust I never felt this...

She then connected me to an AthLife advisor, and from there it only got better. The individuals who are part of this program, they assisted me through the process and I qualified for the scholarship to attend law school. While I was in school, there was a judge position that became available, and people in the community thought enough of me to allow me to be in a position to serve the community in that capacity. A lot of people go to law school to become a judge or to help people in their community. I didn’t have to finish law school. In the state of South Carolina, the Governor appoints after consideration from your local senators.

I have been serving this community for approximately a year now. While being a judge was one of my next goals, I didn’t think it would be feasible for me to do. There are very few judge positions open and there are very few judges that retire - Most of them age out around 72-years-old. I think when God does things; it makes us puzzled at times on how and why he does things. But here I am now serving in a position I never thought I would get to serve in.

I think when God does things, it makes us puzzled on how it gets done. But here I am now serving in a position I never thought I would get to serve in.

Q: What advice do you have for former players after leaving the game?

I think a lot of people want to do the big things right away when they finish. Those big things don’t happen because we're trying too hard, our focus is off and we get frustrated.

Q: What would you tell a player who is hesitant about reaching out to The Trust?

I am a living testimony of the partnership The Trust has with players. I've had an opportunity to work with so many great people in the organization, and that was very meaningful.

It was an integral part as to why I was able to do what I did, you guys gave me a different perspective on relationships between businesses and former or current players. That was something that spoke volumes to me, because you guys were on the giving end and only the giving end. There was nothing that you requested from me other than putting together the paperwork necessary to go through the process.

There was nothing that you requested from us other than putting together the paperwork necessary to go through the process.

I am the recipient of what you guys have done. The Trust was very supportive, provided words of encouragement and resources to do what I wanted to do at that period of time. Like I said, call me. Sometimes players don’t trust each other or organizations. But I hope I will be able to open up the door through telling my story.